Hello folks. Recently I was hired by my good friend to migrate his data from the old server which was running from 2016. Back then we installed OpenVZ platform with some freeware GUI and Webmin and deployed several Virtual machines on it. It was/is working perfectly, but I had to move it to something newer as technology grows. He rented a server from a known provider in Europe called Hetzner AG. The server seems to be powerful with Intel Skylake processor and NVME drives. I was pretty impressed until I've realized that I can't install Debian/Ubuntu on it and simply move forward with Proxmox as freeware KVM/Xen solution so I had to think of different ways to accomplish my mission. Started reading about the virsh tool which is using libvirt as a base (https://libvirt.org/).

The virsh program is the main interface for managing virsh guest domains. The program can be used to create, pause, and shutdown domains. It can also be used to list current domains. Libvirt is a C toolkit to interact with the virtualization capabilities of recent versions of Linux (and other OSes). It is free software available under the GNU Lesser General Public License. Virtualization of the Linux Operating System means the ability to run multiple instances of Operating Systems concurrently on a single hardware system where the basic resources are driven by a Linux instance. The library aims at providing a long term stable C API . It currently supports Xen, QEmu, KVM , LXC , OpenVZ, VirtualBox and VMware ESX .

First started with minimal CentOS 7.6 installation. Depending on the Datacenter used that can be achieved on many ways. Hetzner has their auto installer so this part was almost automatized.

Next thing we need to make sure that Virtualization Technology (VT) is enabled in your server’s BIOS.

To test from shell:

If you get the empty response you will probably need to ask your provider to get that option enabled or if available do that by yourself on site, using IPMI or etc.

Restart server and then push:

Start and enable the libvirtd service:

Step [3] - Configure bridged networking -
By default DHCP based network bridge configured by libvirtd. Well, what is the bridge?

A bridge is a device that separates two or more network segments within one logical network (e.g. a single IP-subnet).

A bridge is usually placed between two separate groups of computers that talk with each other, but not that much with the computers in the other group. A good example of this is to consider a cluster of Macintoshes and a cluster of Unix machines. Both of these groups of machines tend to be quite chatty amongst themselves, and the traffic they produce on the network causes collisions for the other machines who are trying to speak to one another.

The job of the bridge is to examine the destination of the data packets one at a time and decide whether or not to pass the packets to the other side of the Ethernet segment. The result is a faster, quieter network with fewer collisions.

Important: It's vital to understand that a bridge is neither a router nor a firewall. Spoken in simple term a bridge behaves like a network switch (i.e. Layer 2 Switch), making it a transparent network component (which is not absolutely true, but nearly).

You can verify that with the following commands:

Now, I already have some virtual machines on this server so it is normal to have a br0 device. Otherwise, it is perfectly fine to have virbr0 or "Virtual Bridge 0" interface is used for NAT (Network Address Translation). It is provided by the libvirt library, and virtual environments sometimes use it to connect to the outside network.

The normal output is:

Note: You can change/adjust this range to whatever you like by editing network ranges or default MAC address (if needed) by using net-edit command. Here is a useful doc page from libvirt site on how you can use it: https://libvirt.org/sources/virshcmdref/html/sect-net-edit.html

If you want your VMs available to other servers on your LAN, set up a network bridge on the server that connected to your LAN. Now, this part is critical.

1) First what I personally advise is to disable NetworkManager. It usually overwrites the file within /etc/sysconfig/network-scripts which we need to manually modify so we actually don't need that service on our kvm/qemu host.

Now, cd into /etc/sysconfig/network-scripts folder and simple list of files.

In my example with Hetzner server, we had ifcfg-eno1 interface which needs to be modified. Based on my experiences I've chosen MAC Driven Linux bridge method which I am going to explain soon.

Vital points here:
- HWADDR describes real MAC so you need to enter real MAC within eno1 (or eth0) network configuration file.
- BRIDGE=br0 is added so Bridge can communicate with the outside world through the eno1 port.
- SCOPE is added which is peer to the gateway port. In the case of Hetzner AG DC, it was needed.

And lastly from the networking part, there is route-br0 file configured in this way:

Note: Again, there is a gateway0 part which you need to adjust as per your data center settings.

Note: You can visit https://mirrors.edge.kernel.org/centos link with browser to select desired CentOS7 version or any other you wish to install.

In my next example, as done on the live/production server I am going to deploy the first virtual machine.

Rest is really self-explanatory and can be modified as per specific needs.

While pushed that command, keep the screen (Ssh terminal running), open new tab and let's see what VNC port is assigned, so we can finish this installation from VNC GUI style.

The desired output is:

Now, that we know these facts you can sign off from the same terminal, load another one and login to server using SSH Tunnel:

Note: where x.x.x.x needs to be the real IP address of your's server.

Keep the terminal running (1st and 2nd), load favorite VNC Viewer tool (I am using TigerVNC on Linux, but you can load any), and connect to the GUI interface using 127.0.0.1:5900 address. 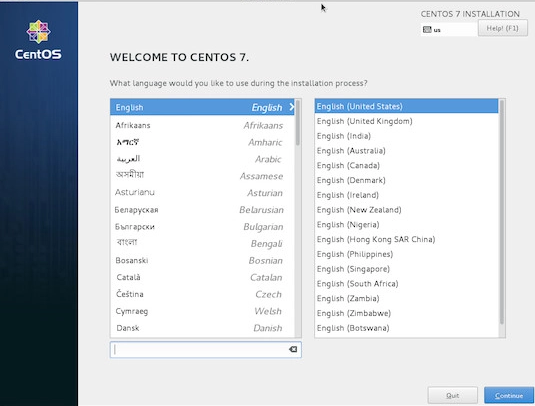 Using mouse please finish partitioning and networking part and to define dummy/plain password which you can use later to configure networking within the virtual machine. Usually, it is fine to put 123456 as a password at this point so you can easily type it on the next reboot. Finish installation and reboot the virtual machine (server).

Login as root user from VNC interface, and let's configure networking there

Note:
it is critical that you enter valid MAC address, IPADDR, and GATEWAY.

Swap back to the Host SSH terminal. We will now configure MAC address there as well:

Adjust real MAC address and save it (it is a vi editor so basically press : and x)

Once you are back on shell (#), please execute:

At this point, you may open a new ssh tab and test additional IP address by ping tool. If you get a response, you can now safely ssh into virtual machine from your local computer, configure new root password and finish installation of other applications needed.

Free addon (tip). My good friend (https://apawel.me) who is experienced sysadmin recommended that before starting with libvirt and qemu installation grab a valid centos qemu ev package from http://mirror.centos.org/centos/7/virt/x86_64/kvm-common/centos-release-qemu-ev-1.0-1.el7.noarch.rpm address. In this case the yum command line needs to be changed to:

Besides that, his recommendation is to enable KSM if you plan to overuse (oversell) hardware:

Note: place line in the /etc/rc.local to make it permanent.

In the next article we will focus on how to deploy virtual machines using Cloud-Init (https://cloudinit.readthedocs.io/en/latest/) method, so please stay tuned. I hope this article helps :) Cheers.

To expand the awareness of your brand, Magento 2 allows inviting products to friends via email by setting up…

Before a while, I had written a post about monitoring a single Linux system. It was being done by…